Skip to navigation
Practical, Purposeful Legal Counsel For clients in San Francisco, San Jose, and the rest of the Bay Area REACH OUT TO US

What Evidence Is Admissible in a Contract Dispute? 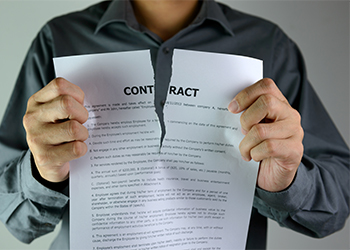 Whether a contract is written, oral, or implied, parties to it agree to terms each will honor. If either party fails to do so, there will be a dispute. In all likelihood, a party to the contract was harmed by the circumstances of the dispute.

There are different ways to handle contract disputes, such as negotiation, mediation, arbitration, and litigation. In any dispute, the parties will need to provide evidence that supports their side of the argument. It could involve personal, sensitive, confidential, or proprietary information. What can and cannot be used as evidence?

At Leet Law, we help individuals and businesses understand the rules of evidence in contract disputes, and we represent our clients’ interests throughout whatever resolution the dispute requires. If you live or own a business in San Jose, Palo Alto, San Francisco, Oakland, or anywhere in the Bay Area, our business litigation experience, resources, and insights can work for you.

What Are Some Common Contract Disputes?

The basis for virtually any contract is one party’s offer to provide something in exchange for the other party’s payment. Some of the more common disputes arise due to such circumstances as:

What Types of Evidence Are There?

There are four types of evidence used to prove a case or disprove allegations, including those arising from contract disputes:

What Makes Evidence Admissible or Inadmissible?

Under the general rules of admissibility, the evidence must be relevant, or “material,” to the dispute. It must also be credible and authentic. Evidence that is merely prejudicial is usually not allowed. Hearsay is usually also not allowed, such as the opinions of people who think the defendant is dishonest without any basis in facts relevant to the disputes at issue in the case.

What Is the Parol Evidence Rule?

The parol evidence rule is intended to eliminate unfair attacks on the contract that is the subject of dispute. The rule renders agreements outside the subject contract itself inadmissible as evidence.

For example, two parties entered into a contract in which one party agreed to sell the other party a list of four products and the other party agreed to purchase them. The buyer then asked the seller to add a fifth product. The seller agreed orally but the contract was not revised to reflect the fifth item. A dispute could arise if the seller delivered the four products in the contract but not the fifth and the buyer accused the seller of breach of contract. Under the parol evidence rule, however, the oral agreement regarding the fifth item would not be allowed into evidence because it is not contained in the disputed contract.

The court could make an exception to the parol evidence rule if the plaintiff could prove that the disputed term, in this example, the fifth item:

The court may allow the fifth product into evidence if the plaintiff can make a case for an exception to the parol rule.

How Leet Law Can Help

Leet Law can help individuals and businesses in San Jose, California, and the Bay Area first by helping them draft contracts that are difficult to challenge when a dispute arises. Leet Law can review contracts you are being asked to sign to raise questions, address discrepancies, and protect your interests.

If a dispute arises surrounding a contract to which you are a party, we can help you negotiate a resolution, navigate mediation or arbitration, and aggressively represent you in business litigation. That is what we do.

If you have a contract dispute or other business litigation, call Leet Law now to schedule a case consultation. Let us help you sort through the evidence.